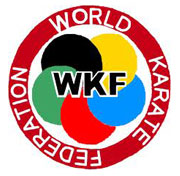 World Karate Federation (WKF) is the international karate federation recognized by the International Olympic Committee (IOC .  In 1970 the first World Federation was created, the World Union of Karate-Do Organizations (WUKO), which in 1990 became the WKF.  Karate is by far the world’s largest martial arts. Karate and will for the first time participate in the Olympic Games in Tokyo in 2020.

President of WKF is Antonio Espinos, Spain and the Secretary General is Toshihisa Nagura, Japan. The WKF headquarter is in Madrid.